This is day two of the 2018 Barkley Sound trip.

Sooke is a short hop from Victoria, only about 15 miles.  We left early enough to catch the current ebbing through Race Passage past the famous Race Rocks, giving us a good three knot speed boost.  I say it is famous as any boater who has ever listened to a VHF weather report around these here parts has heard the wind reports from Race Rocks.  Race Rocks, Sheringham Point, and the Neah Bay Buoy were our regularly monitored weather reporting stations.  Getting data on reality vs. forecast was critical for planning each segment of the journey out and back.  Race Rocks is also famous for being a crucial passage in the annual Swiftsure race, and it has very strong current. 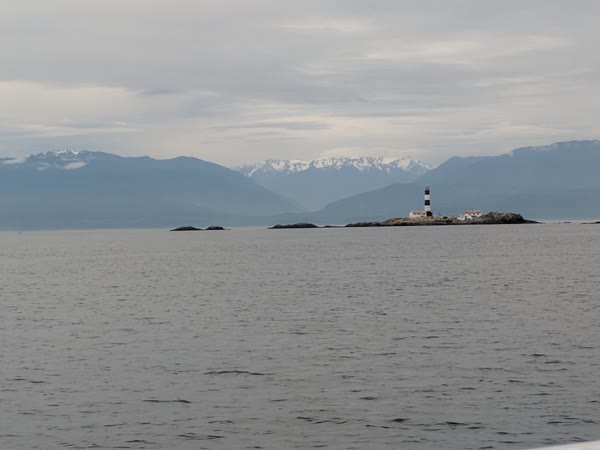 After jetting past Race Rocks, we stopped outside of Sooke and joined the fleet of about 30 sports fishing boats to fish for an hour or so.  We saw a very nice Chinook reeled in by one of the local sport fishermen.  The hotspot seems to be circling around the rocky islet just southeast of the entrance to Sooke.

Sooke qualifies as a "tricky entrance."  It starts out with a huge shelf of depths in the teens and twenties, then you need to thread a narrow passage around a spit and make a sharp turn into the outer Sooke harbor, which is pretty big but also has large areas less than 3 feet deep!  Fortunately there are two sets of nicely lit range markers and a well-marked channel to where we needed to go. 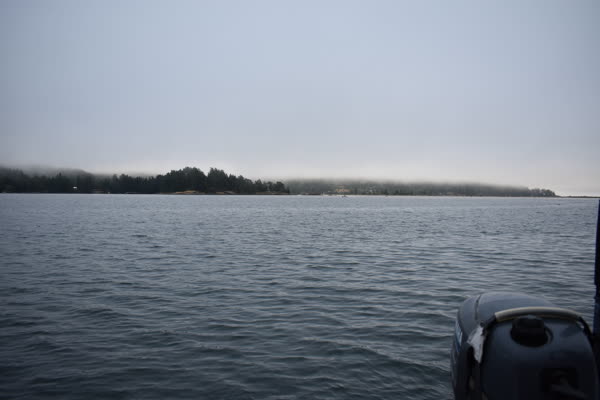 The Sooke Harbour Resort and Marina claimed to be full, although on departing the next morning this appeared to be untrue.  Sunny Shores in Sooke Basin could take us, and while the thought of enjoying their showers and mini-golf course were enticing, it was not quite enough to get me to brave the charted 6 foot depths in the passage to the inner Sooke Basin where they are situated.  So we took a spot on the government wharf with the fishing boats.  It lacked any facilities other than the dock itself, but the location could not be beat with a short walk to the grocery store and Buddy’s Pub just up the hill.  And at just $26 for a night’s moorage you got what you paid for.

I have a soft spot for the government wharves of Vancouver Island.  They are vital to the economy of many of these small towns, and act as a safe harbor to all, allowing rafting when needed.  They offer few services and always are in a linear-tie setup rather than slips (which are generally very rare in BC over 25 feet), but they offer a great view into the soul of these small towns. 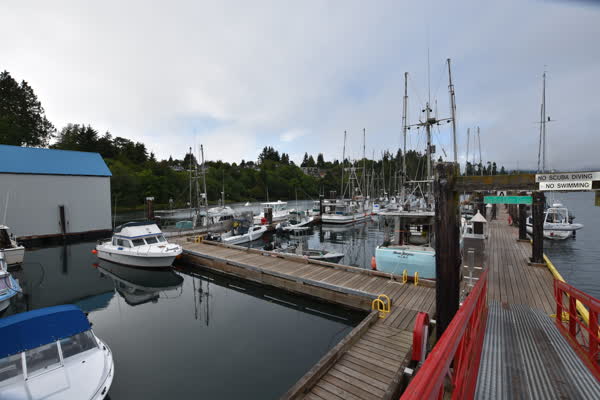 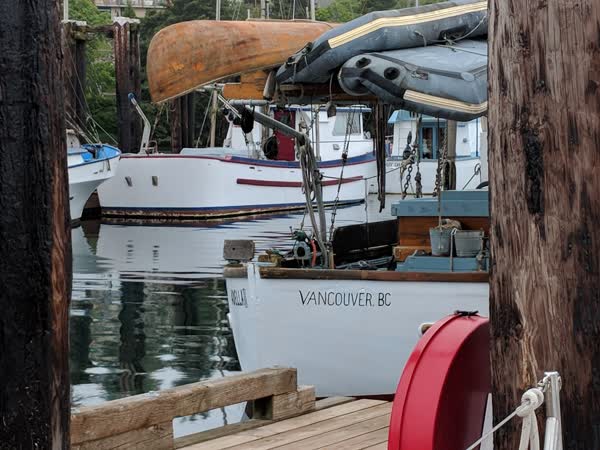 The wharfinger was friendly and helpful, as were all Canadians we encountered on this trip.  I asked about dining options and he said “well, the pub is right up the drive on the main road, and it’s pretty good.  Pub food, you know?  And before you get there you will pass the fancy restaurant which is only open for dinner.  I’ll be honest, their food is better than the pub.  And I guess you could go to the Prestige Hotel around the bend for hotel food.”  This last bit was stated with a derisive sneer that made it clear exactly how the locals feel about the fancy pants Prestige Hotel and its “hotel food." 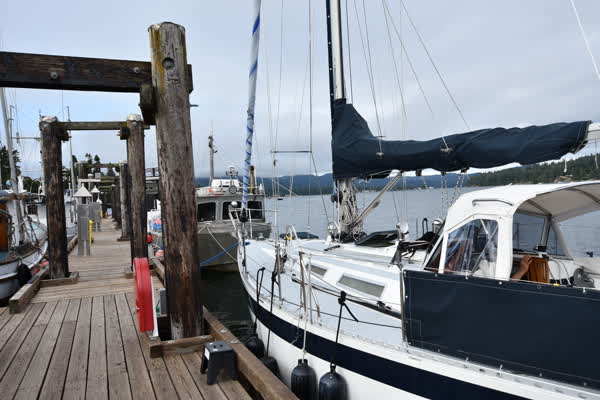 We enjoyed lunch at the pub and picked up a handle of Crown Royal (“Clown Oil”) and 15 pack of Kokanee at the pub’s associated liquor store.  Walked into town for some groceries, then back to the boat for an early night with a correspondingly early 4:00 AM departure.  Our goal was to make it all the way to Bamfield in Barkley Sound, with the new marina at Port San Juan as a backup plan.  Many sailors spend several days holed up in Sooke waiting for a weather window to continue westward. 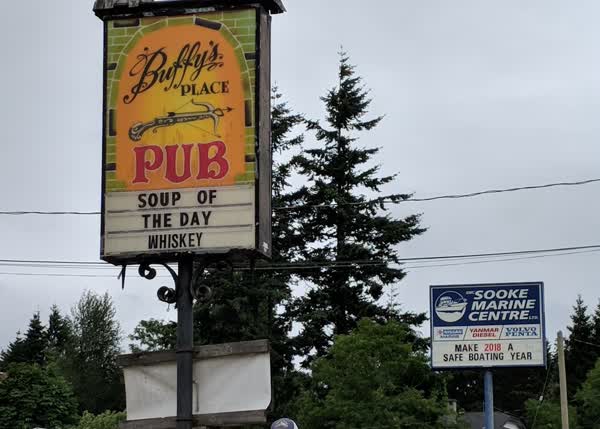 Actual Soup of the Day:  Beef with Cabbage 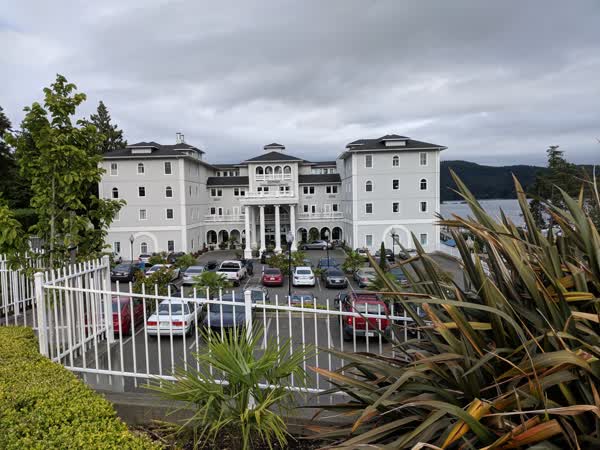 Sooke is where we had our second equipment failure.  Something bumped the switchbox in the galley that controls the flow of propane to the stove, shattering the aged and brittle plastic housing for its fuse.  This is just a simple on/off switch with an indicator light.  It controls a solenoid in the propane locker, enabling or disabling all flow of propane to the line to the stove, acting as a safety against any risk of propane leaks.  This needed a fix pronto, otherwise it was no more hot food for us.  It is a sealed black box and not repairable, so I tried some hacks to bypass it.  Initially I bypassed it so the solenoid was always activated and we just manually shut the tank valve when not in use, but I noticed the solenoid got a little hot and figured it is not meant to have juice flowing to it 24/7, so I wired in a simple switch to turn it on and off.  Another item to be replaced when we get home. 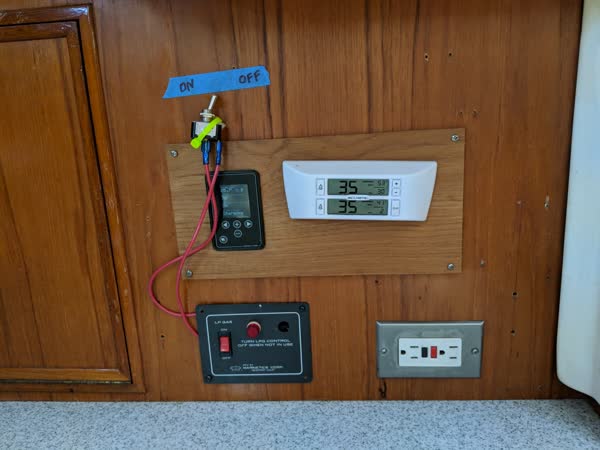